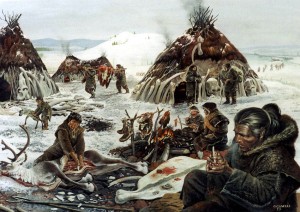 Hominoids only emerged from the Savannah to cover the world after they adopted promises as the basis of their societies. In a material world, where money is used as a replacement, is rediscovering the importance of promises a leap too far for most of us?

There is something that humans before the “economic era” knew and understood, a truth that we find hard to grasp with our economic minds: human society is based on promises, not money. The primary social promise is of mutual safety, given to every member of the society in the form of help and care, available in the event of need, and provided as service. That promise of social safety is not conditional, but it does anticipate that in return each member will make their best personal contribution.

Certainly the humans of a few thousand years ago, and, I would wager, even our great-grandparents, would have unconsciously known that their society was bound together by mutual promises. So basic was this fact that it need not have been consciously examined. That a promise of mutual safety was exchanged for mutual contribution was inherent, instinctive, and bound into the fabric of common understanding, as it has been since the dawn of our species.

If there is one thing that will help you understand our troubled predicament today, it is this: that we are dependent on others, to whom we are bound by promises, not money. If that jars with your sense of reality, you are not alone. If you recognise its absence in the world around you, you are also not alone. Let’s try to understand why.

Something happens to individual people as their societies progress through these phases: their perception of themselves, and the world they inhabit, mutates to match the reality that confronts them every day. Their immediate life experience unequivocally points to the importance of material things, and paid work that produces money that allows access to all the complex infrastructure on which they depend. Large and dense societies also throw up issues around connection, communication and belonging. Humans adapt very quickly to living in large groups, but it stretches our innate social mechanisms, requiring more deliberate consideration and cognition of where and how we fit into our society. A more intensely material existence, and living with many people whom we do not know personally, convene to suggest to us that our connection to others in our society is economic: based on an exchange of money, in return for independence. This seems to be supported by experience, in the early phases of an economic era, as the economy is able to meet the society’s social needs by paying for those costs from surplus economic output (i.e. with money).

An economic era always results in larger and denser populations, with an escalating median age. The scale and density of the population requires complex infrastructure, needing many specialists to build, maintain and renew it, and therefore dependent on extensive education. And during the early phases of an economic era, increasing lifespans are added to the primary contributing ages (16-70), thus adding more productive capacity to the society, with little impact on social burden. But at around the mid-point of an economic era, lifespans increase beyond the most productive years, increasing the social burden. Ageing and education eventually make it impossible to pay for the whole social burden with a reasonable tax on the economy, and the necessity of social contribution reasserts itself.

We can see that from the mid-point of an economic era it is quite normal for our society to look like it is based on money, and things, and economic exchange. And because it usually takes a few generations to pass through an economic era: history becomes legend, and legend becomes myth. The history is that we were bound together in societies through the exchange of promises, the legend is that that was once so, and the myth is that that is no longer so. The fact that, at that mid-point, economic exchange seems to be “working” as a means of supporting society, serves to further entrench the myth.

But legends and myths are not reality, and reality will rule in the end. Which leads us to the financial revolution at the end of an economic era. In the second half of an economic era two competing realities start to converge:

The first is a truth, but the second is only a myth. But at this point the common perception of society, as a material bond between independent people, has become the dominant modality, and so proposals for resolution of the first problem are built on that myth.

In an attempt to square this circle, the functional elements of the financial revolution, that accompanied the earlier industrial and technological revolutions, are twisted to try to solve the social problems with money. In the first, functional, phase of the financial revolution, finance provides tools for the direction of activity and channels of communication through the economy. In the later, dysfunctional, phase, finance’s most basic tenets are perverted in an attempt to turn the myth, that we are bound together by money, into a truth.

The dominant feature of the dysfunctional phase of the financial revolution is the contortion of the basic rules of finance, in an attempt to fashion a solution to what are fundamentally social, not financial, problems. The most common perversion becomes the inability to recognise the destruction of value, on a par with its creation. For instance, if an individual is told that the only safety that they will have in their old age will come from their own personal savings of money, then one cannot let whatever savings are accrued disappear, without throwing the fallacy of the contract into sharp relief. Other distortions include never-ending growth, inconsequential externalities, universal abilities, perpetual productivity increases, inexhaustible demand, unquenchable consumption, the negation of chance, and the sustainability of mountains of debt. None of these are true in the real world, and yet they become the foundational assumptions of the financial structure. These distortions lead to the undermining of finance’s credibility, until it is sustained only by the will of the majority not to face reality.

Those of us living in societies in the latter stages of our economic eras are deep into the dysfunctional phase of our financial revolutions. Transitioning to a society that consciously recognises and incorporates promises as the foundation of its cohesion need not be hard or painful, but it does require us to relinquish our fantasies of independent individuality. Money can never provide reliable social safety, only a mutual promise between the members of a society can deliver social safety – and without social safety, the foundation of human society is removed.

Entrance into an economic era is so obviously beneficial that it is inevitable. And losing sight of the true nature of human society is a natural and normal consequence of such a hectic schedule of change, but it is not sustainable. Eventually the truth will out: that we are held together by, and can only survive with, mutual promises. The critical choice that every society faces at the end of their economic era is whether they can reassimilate this truth before their social fabric becomes terminally dependent on myth.

If the real question is: how do we re-engage with mutual promises for social safety? Neither the left nor the right is actually answering the question, because if money is at the centre of your answer, you have not understood the question.