If you want to understand why all of the major UK political parties are committing to essentially the same fiscal strategy, i.e. reducing borrowing to zero by the end of the next parliament, then you’re going to have to understand what the “yield curve” is. 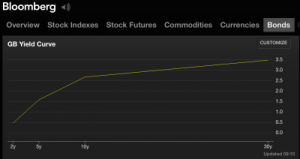 Fairly obviously, as a result of this steep yield curve, the UK Treasury benefits from shifting its borrowing to much shorter term “gilts” (average gilt maturity has shortened by 5 years in the last 4 years, from 14 years in 2010 to 9 years today – see table below), because it is so much cheaper to borrow money over the shorter period. The logic is that if we are unable to repay that debt at the end of the shorter term, then we simply issue new short-term debt (gilts) and use that money to pay off the previous gilts. 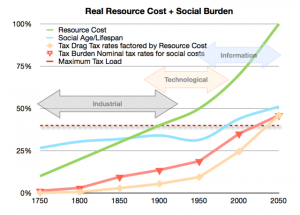 So why are the U.K.’s interest rates to borrow money over the short term so much lower than they are over the long term? The reason is because, over a two year time horizon, lenders have a fairly high degree of certainty that the existing government policy will be enacted, and budgets met. But given the size of the overall fiscal problems for the UK government (we have a very high ratio of debt to GDP, and we have a higher level of annual borrowing to meet current spending, at about 6% of GDP, which is twice the limit set on Eurozone countries’ maximum borrowing), lenders have a much lower degree of confidence about how the UK is going to eventually bring its fiscal situation under control.

When lending money to the UK for just two years, lenders only have to evaluate whether the current set of tinkering measures will or will not be implemented, and they don’t have to care about whether the long term situation will be resolved or not.

About half of the U.K.’s annual borrowing requirements are needed to pay the interest on our debt. So you can imagine that if our interest rate was to double, let alone increase by five times, then the impact on our annual deficit would be catastrophic.

So there you have it. It must be any UK government’s primary objective to convince the lenders of the world, who are financing our annual overspend, that in the short term we have a plan to keep everything in order. “In order” means that we look like we have a plan to stop borrowing so much to finance our yearly needs, and that we will, in some reasonable period of time, reach a point where we will start paying down the overall debt that we have accumulated. There are two components to that policy: 1) that we will not borrow more each year, and 2) that we will stop borrowing every year starting in some reasonable period, like five years, from now. If these two components are not part of any political party’s strategy for the future, then they risk throwing our overall fiscal situation into an unmanageable insolvency. We must finance ~£530Bn of debt in the next 3 years, and over 1 trillion in the next 6 years.

We hear a lot about “growth” in the news. To most of us “growth” simply means that there should be more money floating around the system, and that therefore everybody should be getting a little bit richer. If we read that our economy has been growing, but most of us are not feeling richer, then we complain that there must be a poor distribution of the additional “growth” and we implore our politicians to introduce policies that distribute the “growth” in a more equitable fashion.

What is much less well understood, is that “growth” is an objective in its own right, from a fiscal management perspective. To those in the Treasury and the Bank of England where the “growth” is occurring in the economy is a lot less important than the simple fact that it can be measured and advertised. The reason for that is because the commonly accepted way in which the debts of a country are determined to be manageable, or otherwise, is debt expressed as a percentage of GDP. Any increase in GDP helps to make the total amount of debt look like a smaller percentage of the total economy. When the news talks about “growth” what it is referring to is an increase in the activity that can be included in the measure of GDP. It doesn’t really matter whether that activity has been fuelled by fossils, consumer debt, or in some other way created by the financial system, it all counts as “growth” in GDP, And that makes it look like our economy is bigger, and therefore that our debts are sustainable and manageable.

This explains why the major political parties all include “growth” as part of their fiscal policy framework. In addition to advertising that they will not increase annual spending (“austerity”), and that they have a plan to eliminate current annual spending in the medium term (“zero budget deficit by the end of the next parliament”), they demonstrate a commitment to ensuring that “growth” continues in whatever way they can make that happen.

So now you know, all of our legacy political parties have an economic policy that consists of three parts: austerity, zero budget deficit by the end of the next parliament, and growth. So long as they represent a credible commitment to the three legs of this stool, they will be able to continue to borrow money at low interest rates over the short term. Remove one of these legs, and… well, you can see what will happen. They don’t actually have to deliver the zero budget deficit, so long as it is always on the plan at some point that looks reasonable – ask most knowledgeable commentators on this matter and they will tell you that nobody believes that they’re actually going to deliver a zero budget deficit by the end of the next Parliament. But they do have to credibly constrain spending, and the only leeway they have on that is if there is growth in GDP, that might allow them to spend a little bit more without upsetting the applecart.

So “growth” becomes the miracle drug that every political party hopes to be able to score on the corner of the economy somewhere, and which will then allow them to spend a little more and deliver some populist measure that will get them re-elected. Every 0.1% of growth potentially allows an extra £1.5Bn in extra spending without affecting our Debt-GDP ratio. Aside from this “fix”, they have nothing to offer, no solutions, and no plan for a sustainable fun place to live within our means.

There is an alternative to this continual short term management of our economy to satisfy lenders in the short term. That involves such a radical restructuring of our society, that none of the legacy political parties believe that you are willing to entertain that option.

LIFE is proposing such an option. That we can restructure our welfare system to make it affordable, and to bring down costs across the economy, which will make us more competitive. This is an entirely workable plan, and it is economically sound, and it would be credible to the people who lend us money to finance our debts, but it would require a level of change that our political establishment do not believe that the population is ready to engage in.

So, are you ready for proper change? Or would you rather play along with the current system and pretend that at some point in the medium-term we’re going to get it all under control, but in the short term we’ll just carry on tinkering with our current debt?

1 thought on “UK policy: trapped behind the yield curve”