There is malaise foot, people sense it, and without sensible alternatives they will increasingly gravitate to the simplest and most self-protective options that are available. This political malaise has a short horizon, even if any one of a dozen potential powder-kegs does not go off to shorten it further (a debt crisis in next 3 years being the most likely). 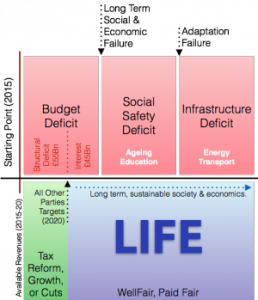 Living life, private or public, off debt is an instinctively unstable position, and we are all aware of our deep financial, social, and environmental debt – for which we have no repayment plan. Individuals in this situation commonly, and understandably, abscond, turn criminal, and rage against the system. For individuals in a decent society we have the rule of law to provide a way out of such situations, for whole societies there is no such rail to lean against. This is the story of the evolution of human societies, and the unfit pass into history.

Without the appearance of a practical, credible and safe path forward, today’s advanced societies are pressing into a breach left open by the failure of both centre-left and centre-right politics to apprehend the dire need for such a path.

Today, the establishment and the business community support the centre-right parties, however because those parties are not proffering any practical solutions to the problems that ordinary people face, in the immediate and in the long term, they are increasingly losing popular support. Leaving a well-funded political apparatus, with significant marketing clout, that looks superficially as if it is providing a political option in a democracy, but whose grip on popularity is dangerously weak. The centre-left is operating from a frozen policy framework, rooted in the aberration of mid-20th century economics, and devoid of any credibility as an alternative. This centre-left remains the last bastion hope for those wishing to revive their mid-20th century fantasies, resulting in a continuous battle for the “heart” of its parties, leaving them primarily afflicted with internal rifts.

The void left by both centre-right and centre-left in our democracies is being filled with brazen populism (UKIP, FN, 5Star), that stands no chance of success were it ever to be given responsibility in reality. However, because they claim to offer safety from a cruel world, they do get support.

Yet, the reality facing our democracies in the next 5 years is greater austerity, in an environment devoid of real growth. We have hardly scratched the surface of what needs to be done, and the choices now are to elect those who, God forbid, say they will get it done, or those that promise that nothing need be done. Neither offers the structural reforms that are really needed.

All this, at a time when the same advanced societies need to be engaged in a deliberate, and long-term, effort to retool and modernise their social and physical infrastructure for the 21st-century. Care for the ageing, increased educational needs, and green infrastructure, are all projects that will take a lifetime to bring to fruition. But progress on none of these will be possible until we advance from our current political malaise.

The challenge is to develop the practical, credible and safe path forward, based on a principled understanding of ourselves and our situation. And then to mount an earnest campaign to win democratic power in the vacuum left by the failing alternatives. If you knew that such an alternative existed, what would you do to bring it to life?